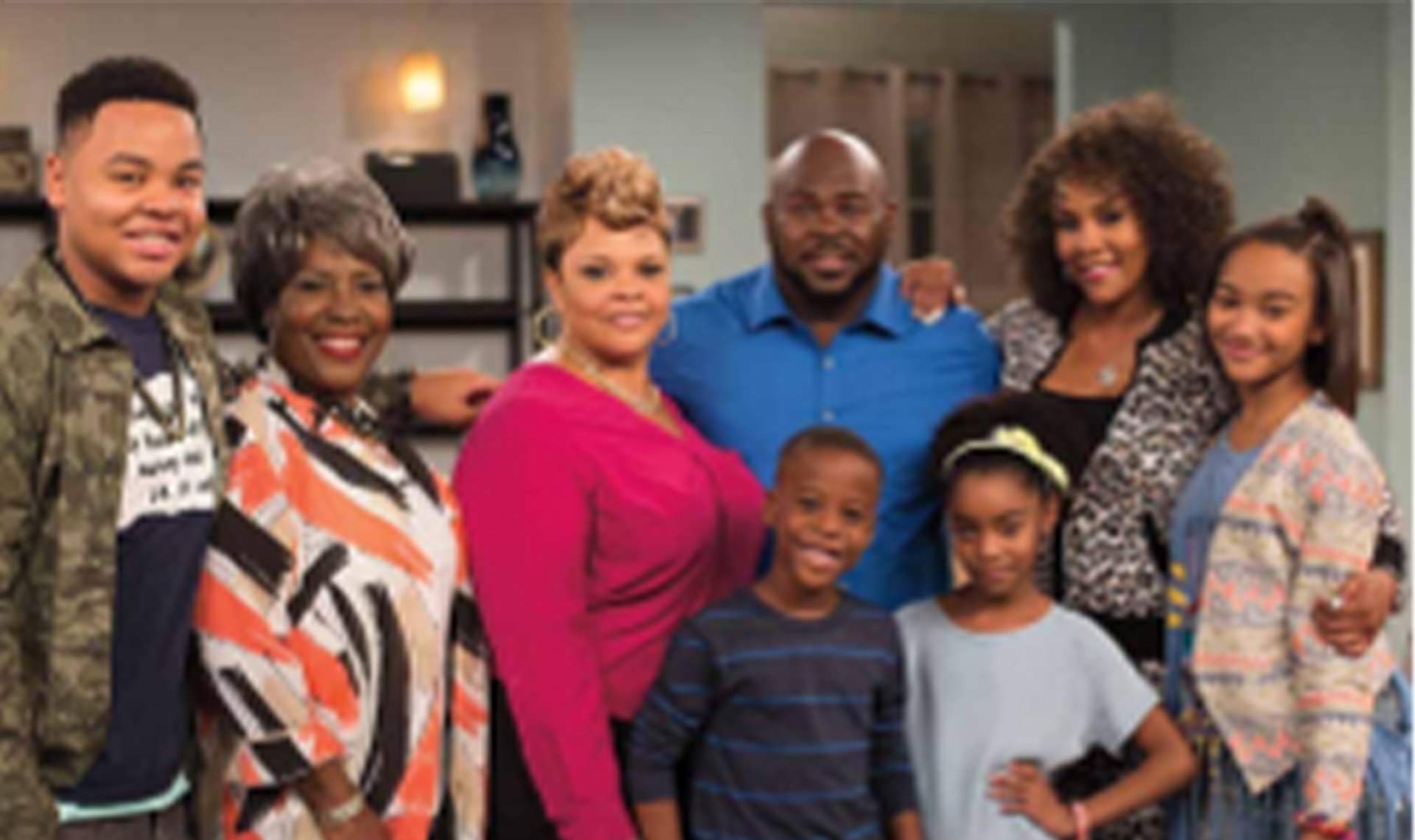 Just the Two of Us!

It only takes one “yes"

An Inspiring Love Story of David and Tamela Mann

Forget about Will, Jada, Kimye, or Jay-Z and Beyoncé. The latest celebrity couple to storm the world is David and Tamela Mann. From Long Beach to Atlanta to Dallas, Monarch joins the Manns in their quest for entertainment world domination. It’s just another day at the job for the two consuming lovers, business partners and real life husband and wife duo David and Tamela Mann. Toshema is taking the back end of a long-toothed comb to fluff that curl that keeps going flat on Tamela’s perfectly-coifed hair, and David is in the corner sharing behind-the-scenes jokes with the small group of bloggers on the set of Bounce TV’s new scripted series Mann & Wife. The couple portrays newlyweds in a blended family with two children each from her ex-husband and his ex-wife. In today’s scheduled episode to shoot, his ex-wife, played by Vivica A. Fox, is in town and all hell is breaking loose.

“Tamela plays a teacher and I play an undercover detective. We come together with my two daughters and his two sons,” explains Tamela Mann. “We know a lot of families are blending their families these days so this is a relevant subject with modern families today; blending their families.” On the Long Beach Mann & Wife set, stepchildren, baby-mama dramas, and the stresses of execs may be written into the script but are not a factor in the real Manns household. After 26 years of marriage along with the ups and downs of choosing the entertainment industry as their profession, the Manns know a thing or two about keeping it right at home.

MUSIC BROUGHT US TOGETHER

It was the late 80s and in the great state of Texas when the two met. Both were raised in the church and were looking to start their careers in music. Tamela grew up the youngest of 14 children in Fort Worth and David was raised in a strict Pentecostal Fort Worth household. A friend invited Tamela to come to her high school choir practice where she met David, Kirk Franklin, and Darrell Blair, who had their own singing group called Humble Hearts. Later the Humble Hearts asked her to join the group and at first David and Tamela quickly became good friends. “A friend of mine brought her (Tamela) to the group where myself, Kirk Franklin and Darrell Blair sang,” remembers David. “Tamela thought she was bad and she came to the school to teach us how to sing.”

“It was my best friend that introduced us,” says Tamela.

Music seemed to be their route of escape from poverty. “I’m the only one that graduated high school; we were very poor,” remembers Tamela. “We didn’t have a car so every musical I went to I was always thumbing a ride…. A lot of people in my church sheltered me, took care of me, and just filled the needs that my family couldn’t fulfill.”

Naturally it was Gospel music that gave them their first taste of success. And their friendship turned into something more and they married a few years later.  The couple were legally wed in 1988 but never had a proper ceremony. “When we got married 25 years ago, we didn’t have enough money for a wedding,” explains Tamela, whose pastor married them in his study. At the time, Tamela even had to borrow a ring.

“It is not like I knew ‘Oh that’s going to be my wife and we are going to get married!’ because first, I wanted to see how she was a friend. I wanted to see if we could be friends because anybody can be lovers,” explains David. “I came with a package. I have a daughter from a previous relationship, so I wanted to see what kind of friend Tamela could be…. I knew once I started dating her and because of the anointing she has on her life, I knew I was not messing around with just any old body. I knew this is going to be for real or it ain’t going to be it at all.”

The Manns would go on to sing on five studio albums with Kirk Franklin & The Family. However, due to some serious internal issues, the group disbanded and several of the members eventually sued Franklin. While on tour with Kirk Franklin and the Family, a promoter introduced them to an up-and-coming playwright, Tyler Perry. Tyler Perry wasn’t “Tyler Perry” back then. Hard times followed and the couple, in addition to doing “chitlin circuits” with Perry’s stage plays, they had to take odd jobs and live with David’s parents to make ends meet for their growing family. “Nobody ever knew this thing would take off. When I met him, I was just happy to be there,” remembers Tamela. “I said, ‘I’ll sing for you, and I don’t need no big role. I’ll sing as many songs as you want me to sing.’ He told me he’ll have me acting too, and I gave him a smile.”

Their life changed when joining forces with Tyler Perry who had written, directed, and produced numerous plays including the stage play hits, I Can Do Bad All By Myself, Madea’s Family Reunion, Madea’s Class Reunion and What’s Done in the Dark where David remarkably immortalized the intrusively-nosey, wisecracking, ashy-kneed, and outrageously funny neighbor, “Mr. Brown.” David’s bravo performance led the way for “Mr. Brown,” an often-confused widower who’s turned his inheritence – his father’s old house – into a retirement home where eccentric residents and employees keep things interesting. Mr. Brown along with “Cora,” Mr. Brown’s daughter, who often was the sole voice of reason, grew to become principle characters in many of Perry’s stage and film comedies, including the motion picture, Tyler Perry’s Meet the Browns, in which David and Tamela reprised their roles of “Mr. Brown and Cora” for mass audiences on the TBS series from 2009 to 2012.

Both characters were surefire hits, playing to packed theaters and grossing millions for the couple who played father and daughter on television. It’s easy to retreat to skepticism when it comes to Hollywood love or love that’s make-believe, written for the viewer to watch. After all, relationships start and end in Tinseltown faster than you can say “Action!” But David and Tamela and their everlasting commitment to each other prove that not all is lost. “At one point in our marriage, Tamela was on the road touring for a whole year while I was at home playing house husband (they have four children),” explains David. “I would call her about 10 times a day especially while I was in the grocery store because I didn’t know what to buy. I washed clothes, made sure the kids’ homework was done and cooked all the meals while Tamela was on the road touring with Tyler’s Diary of a Mad Black Woman. After she came home, I had a new respect for housewives!”

2012 proved to be a memorable year for Tamela as she joined Jordin Sparks and Whitney Houston in the film Sparkle, and she released a new album, Best Days. Produced by Myron Butler and Kirk Franklin, the project showcases her powerful voice and her gift for wringing every ounce of emotion from a great lyric. One of the most powerful tracks on the album was the debut single “Take Me to the King,” produced by longtime friend and Gospel icon, Kirk Franklin. The lyric acknowledges how heartbreakingly challenging life can be and how respite can be found in the presence of the King. Neither David nor Tamela have much time to sit at home these days. In 2014, the Manns announced several new shows going into production including a reality series on BET called It’s a Manns World which premiered in January 2015. The show chronicles “gospel’s first couple,” their 5 children and 4 grandchildren, as they navigate family life and fame on their ranch in Dallas. The couple premieres an online food and lifestyle series, Hanging with the Manns, found at www.tillymannmusic.com, where the duo share cooking and lifestyle tips. David, 48, was first motivated to get healthier when he was diagnosed with type 2 diabetes in 2007. Tamela, also 48, doesn’t have diabetes but has a family history of type 2, so she’s staying on top of her health to prevent diabetes. And they’re spreading the healthy-living message on their own with Hanging with the Manns, as well as volunteering for the American Diabetes Association.

This year, Bounce TV, the nation’s fastest-growing broadcast television network designed for African-American audiences, also announced its original programming plans for their spring 2015 season, one of which was a scripted series called Mann & Wife. The family sitcom has the Manns reuniting with series creator and director Roger Bobb of TV One’s The Rickey Smiley Show, who calls Mann & Wife “a new black Brady Bunch.” Bobb was the executive producer of Meet the Browns and was the Supervising Producer of House of Payne which premiered on TBS as the highest-rated first-run sitcom in basic cable history.

“We go way back with Roger Bobb. Bobb shot more than 100 episodes of Meet the Browns, we’ve worked with him on many movies, and he knows exactly how we like to shoot,” says David Mann. “We just work very well together. And he’s over-protective of Tamela; and we’re so happy to be a part of the Bounce TV family because they’re allowing us to grow our brand.”

Roger Bobb is also the executive producer and director for their BET reality series, It’s a Manns World. “As we know all too well, many ‘reality’ shows which feature African-Americans choose to focus on petty arguments, physical confrontations and conduct which is not truly representative of the beautiful unit which is the American black family,” explains Roger. “As a content creator, I can sit and complain about it or do something about it. I’ve chosen the latter. …this show which showcases family values in an entertaining and comedic way. If we want to continue to see positive images on television then we need to support them. Thank you.”

David and Tamela genuinely seem to really enjoy each other’s company. David loves being with Tamela more than any other person and Tamela says they’ve learned to agree to disagree when they don’t see eye to eye. “We started out as best friends and we tell each other everything,” Tamela says of what keeps her marriage strong. “Everything that we have accomplished has been together and it’s just really a blessing.” There are some principles that Tamela says have helped them stay together all of these years. They make a point to make each other happy. Tamela says they “outdo each other doing for each other.”

Divorce is not an option. Pleasing God is the center of their relationship. They deal with practical things face-to-face and face them together. They tell each other all the time that they enjoy each other. “I believe the key to a successful marriage is God and having a good role model,” believes Tamela. “Your role model needs to constantly be in contact with you and is there to show you how it can be done and to help you fix things that are constantly nagging your marriage, things that seems to always cause arguments; and they should be there to help as a neutral person in the middle. We just love each other. I mean this man is my best friend, my baby-daddy and he’s what I asked God for a long time ago,” says Tamela.

“We both lean on each other a lot.  When I am weak, Tamela is strong; and when she is weak, I am strong. It’s really worked for us; being together and working together, eating together, sleeping together. And we’ve been doing TV together for so long, I can’t imagine doing this without Tamela at my side,” believes David Mann.