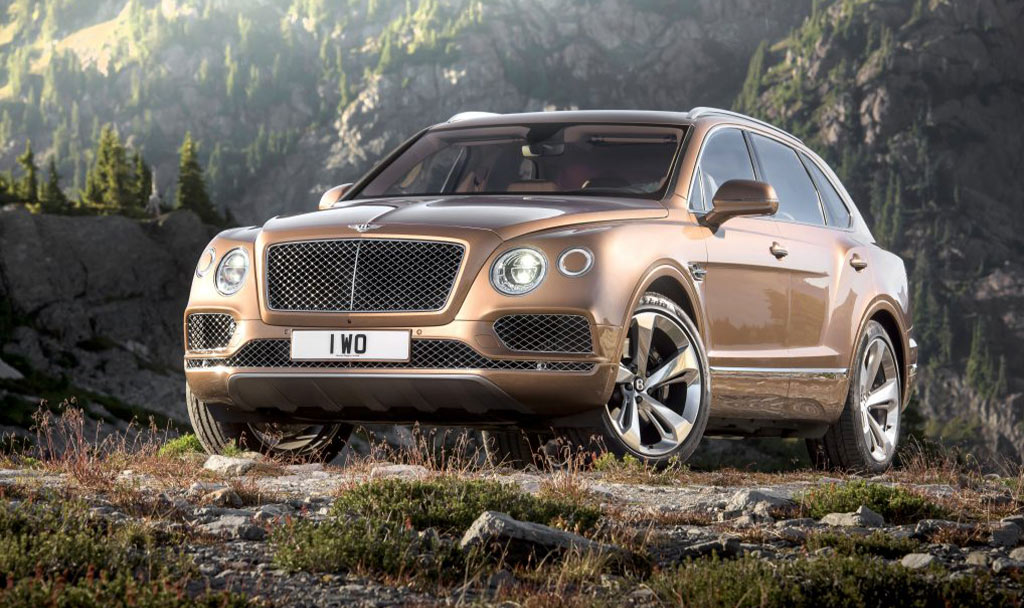 An S.U.V. that Bond can appreciate—James Bond that is!

While Ian Fleming’s most famous protagonist has become synonymous with Aston Martin over the years, his first car was, in fact, a Bentley. In the first James Bond novel, Casino Royale, (1953), Fleming noted that “Bond’s car was his only personal hobby. One of the last of the 4.2 liter Bentleys with the supercharger by Amherst Villiers, he had bought it almost new in 1933 and had kept it in careful storage though the war…Bond drove it hard and well and with an almost sensual pleasure. It was a battleship grey convertible coupe, which really did convert, and it was capable of touring at ninety with thirty miles an hour in reserve.” Bond’s automobile was one of the most lauded of all Bentleys and perhaps the ultimate performance car of its day. Its supercharger would have protruded from the front grille, making it a “Blower” Bentley, not dissimilar to the cars driven by the notorious Bentley Boys and Tim Birkin, who was described as “the greatest British driver of his day” by W.O. Bentley. The Blower was a beautiful coach built machine, at once powerful and fast but ultimately elegant.

For more than 95 years, Bentley has continued to produce cars of the utmost quality, but they are no longer the preserve of the English gentry, or, evidently, the globetrotting super-spy. They’re an international brand and one that has had a dramatic effect on the global luxury automobile industry, having sold more than 10,000 cars a year for three consecutive years. This is just the start, though, and while the Continental GT—the first car produced under the helm of the Volkswagen group—ensured success, their newest car, the Bentayga, is going to propel them to new levels.

The Bentayga opens up another world for Bentley. It’s the first S.U.V. the Crewe firm has produced, opening up a new kind of customer to them, one who requires space for a family but who does not want to sacrifice a luxurious interior and that all-important dynamic driving experience. It’s a huge risk, and some might say it has the ability to alienate potential returning customers. There’s a reason Aston Martin stopped producing the Cygnet, after all. Bentley doesn’t appear to have been worrying, though, fearlessly claiming that the Bentayga is “the fastest, most luxurious and most exclusive S.U.V. in the world.” They are largely correct. The Bentayga is particularly fast. A far cry from the measly 25bhp power output of 007’s Blower, it has a crushing 600bhp and an even more impressive 900Nm of torque. What this equates to is devastating acceleration that, when you flatten the right pedal, belies the car’s enormous bulk. The low-end torque actually feels unnatural, to the point at which you wonder just how Bentley’s engineers manage it, considering the near two-and-a-half ton weight of the car. The 6.3 liter, twin-turbo W12 fizzles out at the top end, as you would expect, and its sound is far from inspiring, but the any-gear overtaking ability is truly meritorious. It will hit 60mph from standstill in just 4.0 seconds, and it will top out at 187mph, an unheard of feat for such a large machine. Where it impresses most, however, is in its ability to tackle virtually any road surface with aplomb. I drove the Bentayga on both desert dunes and race tracks, perhaps two of the most drastically different surfaces, and on both occasions it felt at home. Sure, it isn’t about to win the Paris-Dakar rally, nor is it about to topple the Nordschleife leaderboards, but its versatility speaks volumes of the car’s ability and, of course, the talented engineers who put in the hours at Bentley’s factory in northwest England. It would be foolish to speak of the Bentayga without addressing the elephant in the room: its styling. It won’t appeal to everybody, but then neither did the Continental GT when it was first launched, in 2003, and that’s become something of a classic. What the Bentayga does do is set a precedent for what to expect from Bentley in the coming years. It references classic Bentley styling yet reinterprets it in a contemporary, sporting way while managing to remain elegant. According to Sang Yup Lee, Bentley’s chief exterior designer, “The exterior of Bentayga has a strong performance-oriented look, especially from the distance, because of the proportions (the high body side and dynamic roof line) and design cues (the powerful rear haunch), which are supported by aggressive deep-dish 22-inch wheels. But when you get closer, it is very elegant, because of the sophisticated surfaces, jewelry–like details and master craftsmanship in execution.” No one can doubt that it has a palatial interior. The same attention to detail applied to other Bentleys has been blessed on the Bentayga, namely a level of quality and handiwork only the finest artisans can produce. Swaths of leather cover everything that isn’t either wood or turned aluminum, and the quilted leather seats hug you reassuringly behind the sporty steering wheel. It is a car you’ll want to spend time in—which is a good thing, considering its price. Starting at $169,699, the Bentayga is expensive. To compare, a new Range Rover costs $80,347 and a Porsche Cayenne S costs $64,453. But then, the Bentayga isn’t competing with them at all. It is both a car more luxurious than a top-of-the-line Range Rover and a machine faster than the quickest Cayenne Turbo S. It might not be the best looking S.U.V., but it is certainly the ultimate. And that’s something Bond would appreciate, surely.